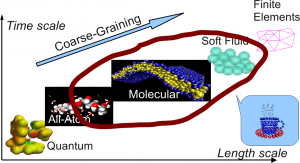 The length and time scales where ESPResSo works best.

ESPResSo is a highly versatile software package for performing and analyzing scientific Molecular Dynamics many-particle simulations of “coarse-grained” bead-spring models as they are used in soft matter research in physics, chemistry and molecular biology. It can be used to simulate systems such as polymers, liquid crystals, colloids, ferrofluids and biological systems, for example DNA and lipid membranes.

In “coarse-grained” models, a whole group of atoms or molecules are treated as a single bead. Although many details are coarse-grained away in these models, they can often predict qualitative properties, such as for example the scaling behavior of a system, and can give insight into theoretical models.  Due to the drastic reduction of degrees of freedom, coarse-graining allows to investigate systems which would be out of reach of the commonly used atom-based simulations, due to the large time- and length scales of the studied processes. 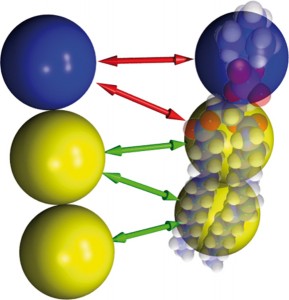 Coarse-grained model of a lipid

ESPResSo is capable of doing classical Molecular dynamics simulations of many types of systems in different statistical ensembles (NVE, NVT, NPT) and non-equilibrium situations, using standard potentials such as the Lennard-Jones or Morse potential. It contains many advanced simulation algorithms, which take into account hydrodynamic (lattice Boltzmann) and electrostatic interactions (P3M, ELC, MMMxD). Rigid bodies can be modelled by virtual site interactions, and it can integrate rotationally non-invariant particles.

The logo of ESPResSo has been made using the software itself.

ESPResSo is free, open-source software published under the GNU General Public License (GPL). It is parallelized and can be employed on desktop machines, convenience clusters as well as on supercomputers with hundreds of CPUs. The parallel code is controlled via the scripting language Tcl, which gives the software its great flexibility and allows for many unconventional simulation protocols, as are often required when studying coarse-grained models.

Used all over the world

ESPResSo is used in scientific working groups all over the world both as a production platform as well as a research platform for developing new algorithms and methods and designing new models for coarse-grained simulations.  It is mainly developed and maintained at the Institute for Computational Physics of the University of Stuttgart, but has contributors from all over the world.